Free shipping on orders over $75

We discussed sustainability, advocacy, and philanthropy with filmmaker and kind human James Redford. He shares the inspiration behind his films and the objectives of the nonprofit Redford Center, which he founded with his father in 2005. We’re excited about his dedication to make a difference in the world by promoting kindness and supporting others! – KH

Tell us a little bit about yourself. Who is James Redford?
I am a storyteller. Many years ago, I encountered my best friend from early childhood. Upon learning that I was writing screenplays, he said, “I could have guessed.” When I asked him why, he said that I was always “making up stories that got me into trouble.” I am very curious. I am constantly developing interests and passions and I tend to be an adrenaline junkie. Unfortunately, I’m accident prone, but that doesn’t stop me. At 57, age has also mellowed me somewhat, but if there is a skateboard in the driveway…

I had an incredibly fun time raising my two kids, reliving many rites of passages and being childlike with them. My wife, Kyle, and I met in college, matured into adulthood together, and are best friends. I have had a lifelong affair with the guitar that has never waned. I like being out in the world. I like most people. I love making films that add to people’s lives.

What led you to a career dedicated to social justice documentary filmmaking?
I have struggled for most of my life with a serious chronic illness. At 30, I received a liver transplant. When I emerged from that, I felt a calling to do what I could to help create awareness about organ donation. That led to my first documentary film for HBO, The Kindness Of Strangers. At the time, it became the film of reference for those working in organ donation advocacy. Although I was writing screenplays and directing features at the time, the rewards of telling stories that could chip away at vexing societal problems stayed with me and eventually became my sole focus. 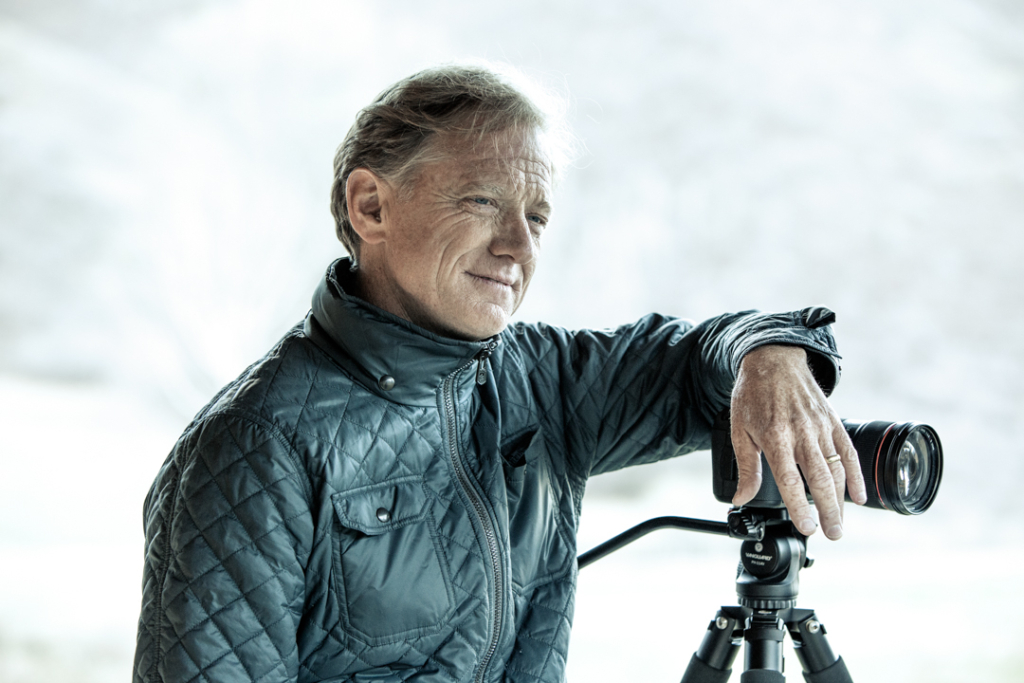 Can you tell us a little bit about how you and your dad, Robert Redford, founded The Redford Center?
The Redford Center had a long evolution toward what it is today. Initially, it was based at Sundance Resort and mainly educated the local population about the value of land conservation and repair. Over time, the mission evolved to utilize the power of storytelling to inspire impact and action in the environmental space. Both of us felt that however grim a particular problem might be, it is important to have an undercurrent of hope in all of the stories produced, sponsored, and supported by The Redford Center. It’s hard to expect people to take action if there is no hope.

Why do you think it is important to inspire the next generation of filmmakers like you are doing with grants and stories?
The urgency of climate change and many of the related environmental challenges we face mandates that we saturate our culture with stories that inspire action. That requires scaling up beyond our own production capacity. It also demands a diversity of voices and perspectives representative of society at large. As the next few decades will be critical in terms of minimizing the impact of climate change, it’s particularly important that we support and promote the voices of our youth.
It’s also very important to nurture and support any young person who is inspired to work in a space that is chronically underfunded and must compete against the onslaught of entertainment for entertainment’s sake.

What does sustainability mean to you and what role does it have in your work with the Redford Center?
To us, one aspect of sustainability requires behaviors and practices that minimize the negative impact on our environment. We encourage recycling, eliminating plastics in the office, offsetting our carbon footprint, signing up for renewable energy options; generally walking the talk.

Beyond that, it’s about finding a balance between what we take from nature versus what we protect and preserve. Truth be told, it’s impossible to meet the current needs of the human population without impacting the Earths’ ecology. But we could and should be much better stewards if only to ensure our long-term survival. We need to inspire a culturally broad mindset that understands that ‘less than perfect’ is no reason to despair or disengage.

What environmental and social issues are you most personally passionate about?
I get particularly upset at the nexus of environmental and social injustice. A few of my films were driven by that. In HBO’s “Mann V. Ford” we followed a Native American community’s attempt to sue Ford Motor Company for knowingly dumping toxic paint waste in abandoned mine shafts that ran under their town. The rate of cancer in that community was staggering, yet Ford was ultimately able to avoid accountability. When corporations misbehave, it is often the most vulnerable who pay the price. That makes my blood boil.

Can you share a moment in The Redford Center’s history that really stood out to you? Maybe a certain project that stood out? Or a certain filmmaker?
The Redford Center’s Watershed was a turning point for us. While it certainly stood on its own as a great film, it was conceived to inspire people to support a binational effort with Mexico to bring water back to the Colorado Delta. Several large donors who saw the film gave generously to the related Water Trust, and very real progress was made. E.D. Jill Tidman and I were turbo-charged by the results of that work and it really set us on the course that we are enjoying today.

Tune in to catch James and Jill speak at the Bloomberg Green Festival (September 14-18, 2020), a new, culture-shaping event will feature leading voices working at the edge of change.
James and Jill speak to their organization’s vision and commitment to creating impact-driven storytelling that galvanizes environmental action. They are joined by director, writer, and producer Laura Nix, who worked with The Redford Center on her film “Inventing Tomorrow.”

What do you most look forward to in the work The Redford Center has ahead in 2020 and beyond?
The last decade for the Redford Center was a time of deep learning and experimentation. The next decade will focus on taking that knowledge and wisdom and expanding its reach and impact. More support for young filmmakers, more support and curation of kindred projects, more diverse Redford Center content – all while staying relatively lean and mean.

What does kindness mean to you? What role does it play in your life?
Kindness is empathy and compassion in action. Our capacity to see and feel things from the perspective of another is one of the more unique attributes of being human. It’s a gift, and when practiced, it helps the giver as well as the receiver.

“Perhaps this is selfish, but I feel better when I’m kind. Being cold, looking the other way, following your lesser instincts – nothing good ever comes from that.”

Name three kind humans in your life that have positively affected you and why?
I am alive because of the kindness of two families who, in the worst possible moment of their lives, decided to donate a loved one’s organs. Decades later, I still marvel at the gift. Because of my time spent in health care, I have also witnessed many examples of nurses who go above and beyond to treat their patients with loving kindness.

If you had one wish for our future generations what would it be?
We are living in a time where the fear and anxieties of the modern age can trigger cynicism, hostility, and divisiveness. This is perfectly embodied by President Trump. I hope the younger generation isn’t consumed in its wake but rather reacts against it.

What is a fun fact about yourself that isn’t widely known?
I played in a rock n’ roll cover band all around Marin County for eight years. It ended a few years ago when the drummer moved to Sacramento. Why is it always the drummer?

If you could spend time with any kind human in history, who would that be and what would you do together?
If Jesus was really the man as history has recorded him, it would be hard to beat dinner with him at a beachside café somewhere along the Amalfi Coast. No disciples, no entourage – just two dudes catching up and sharing stories about their lives.

What is a message you want to spread and leave with the Kindhumans community?
Somewhere along the way, “kindness” took on some negative connotations: Weak. Uncool. Naïve. Unrealistic. But if you are touched by kindness, that all tends to evaporate. Deep down, everyone wants and needs kindness. Every act of kindness, however small, just makes the world a better place. 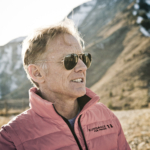 James lives in Marin County in the San Francisco Bay Area. He loves the quick access to the restaurants and culture of San Francisco, while offering ample opportunity to spend time outdoors – biking, hiking, and surfing.

“Besides playing guitar, I love cycling, hiking, and swimming in the ocean. I also love going to movies. Call me old school, but popcorn, root beer, the dark and cool room, the larger than life imagery – what’s not to love?” – James Redford 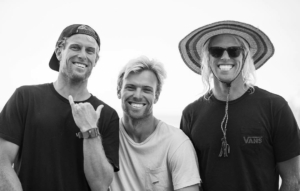 Well known for their beaming smiles and world-class surfing, the... 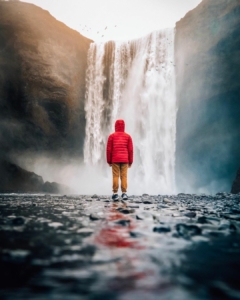 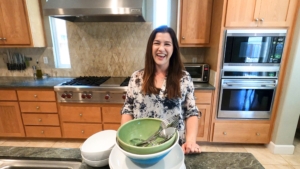 The Journey to Kindness Starts Within Series

Natasha Loeffler-Little is a passionate teacher of Pilates, nutrition, and...

KINDNESS. PASS IT ON. 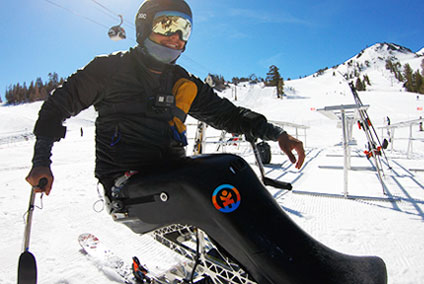 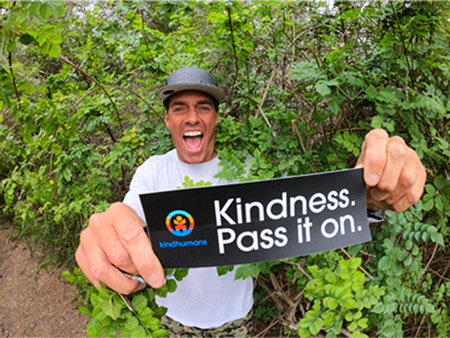 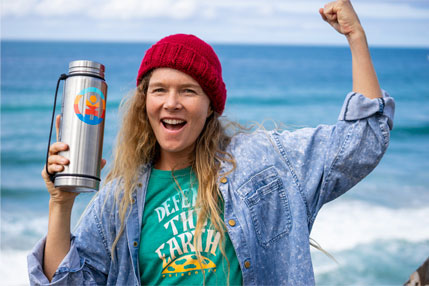 They'll receive a sticker pack and message of kindness from you.

We will notify your kind human with an email, a text, or both.

Add a message of kindness.

ERROR: Some errors in the checkout process. 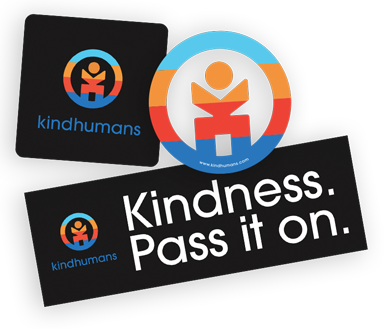 1. Pick a recipient and add a message of kindness.

2. Choose a cause and enter your payment information.

3. We'll send your recipient an email to accept their stickers and provide their shipping address.

Send this to a friend

James Redford Uses Storytelling for Climate Justice and to Inspire the Next Generation
https://kindhumans.com/kindhumans-blog/james-redford-uses-storytelling-for-climate-justice-and-to-inspire-the-next-generation/